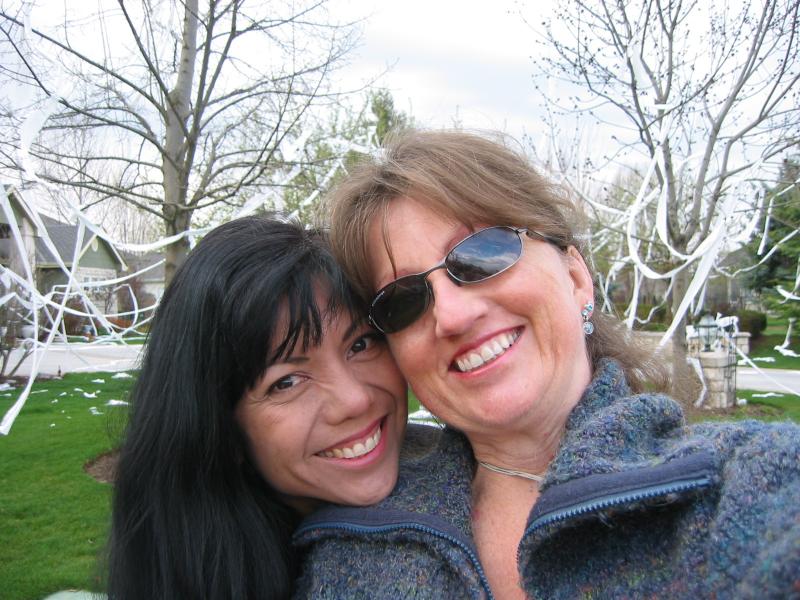 Posted in : Confessions of a Band Geek, Girls Just Want to Have Fun on April 27, 2008 by : TetonTrekker Tags: TBT

Vicki & I have been BFFs since 5th grade, we lived next door to each other in Azusa, we were born on the same day, and we both played flute in the AHS Marching Band. In High School, fall weekends in Azusa consisted of performing at all Friday night football games, half time shows at home games, then Saturday Marching band competitions. Azusa had a very good marching band.

God Bless Mom for getting a photo 🙂

After the Friday night game a group of us would get together and go TP houses of the other band members as a good luck token for our Saturday morning band review. Only the cool kids got their house TP’d, I was a geek so I never expected my house to get TP’d.

Apparently when my dad was a kid only the geeks got their house TP’d because one night when our house got hit my Dad chased the kids down the street, in his underwear, waiving a gun and yelling profanities at the kids…. or so I was told. My dad came in yelling at me that I was going to clean that whole mess myself, I was trying not to smile because only the cool kids got their house TP’d!!!!

That night lives in infamy among the AHS band members of the late 70’s. When I run across old classmates I get reminded about that night. SO when Vicki and I saw this house with the best TP job we’ve seen in years we found the perfect opportunity to get a photo. We walked away giggling like two 16 year olds.

The bottom of my heavy duty hole punch fell out an

The temp varies around town. It’s -8* at my hou