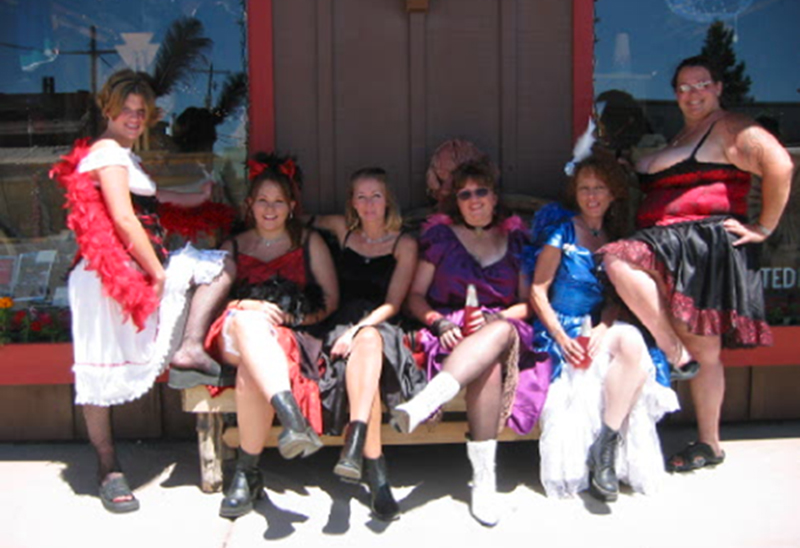 Posted in : Around Town, Get-Togethers, Girls Just Want to Have Fun on July 10, 2004 by : TetonTrekker Tags: Floozy, Pinedale

Summer 2004 I was invited to be a “Floozy” in the parade at the Greenriver Rendezvous, it sounded like fun so I what the hell, I said yes. It was a BLAST!! We went bar hoppin’ in our Floozy costumes the night before the parade. (aka: Floozin’)

I had not closed the bars in Pinedale in 20 years. Pinedale has no open container law so you just stop at one bar and get your drink then cruise to the other 2 bars and see who is out and about. Jeanie and I stayed out until the bars closed then went to a tailgate party for a while, I think we strolled in around 3am. Everyone was sleeping by that time, our room was occupied by 3 kids sleeping on two mattresses on the floor, Jeanie and I slept with Fred… the dog.

Oh my God!… That is what we nick-named her, because all who saw her in costume said… “Oh My God!”

The next morning was the parade, Carmin had 48 overnight guests at her house for this shin-dig. Yes, 48!!! There were even people sleeping in the back yard. It was mostly women and children, and only about 4 men with glazed over eyes.

After the Parade we walked the streets in our costumes and looked at the venders booths. Then we went home, changed and went to the Rodeo Saturday night.

Bull Poker… we weren’t the only ones acting like fools, this was truly the most foolish thing I saw all weekend.

I don’t mind acting like a fool as long as I have another fool (or fools) standing next to me.