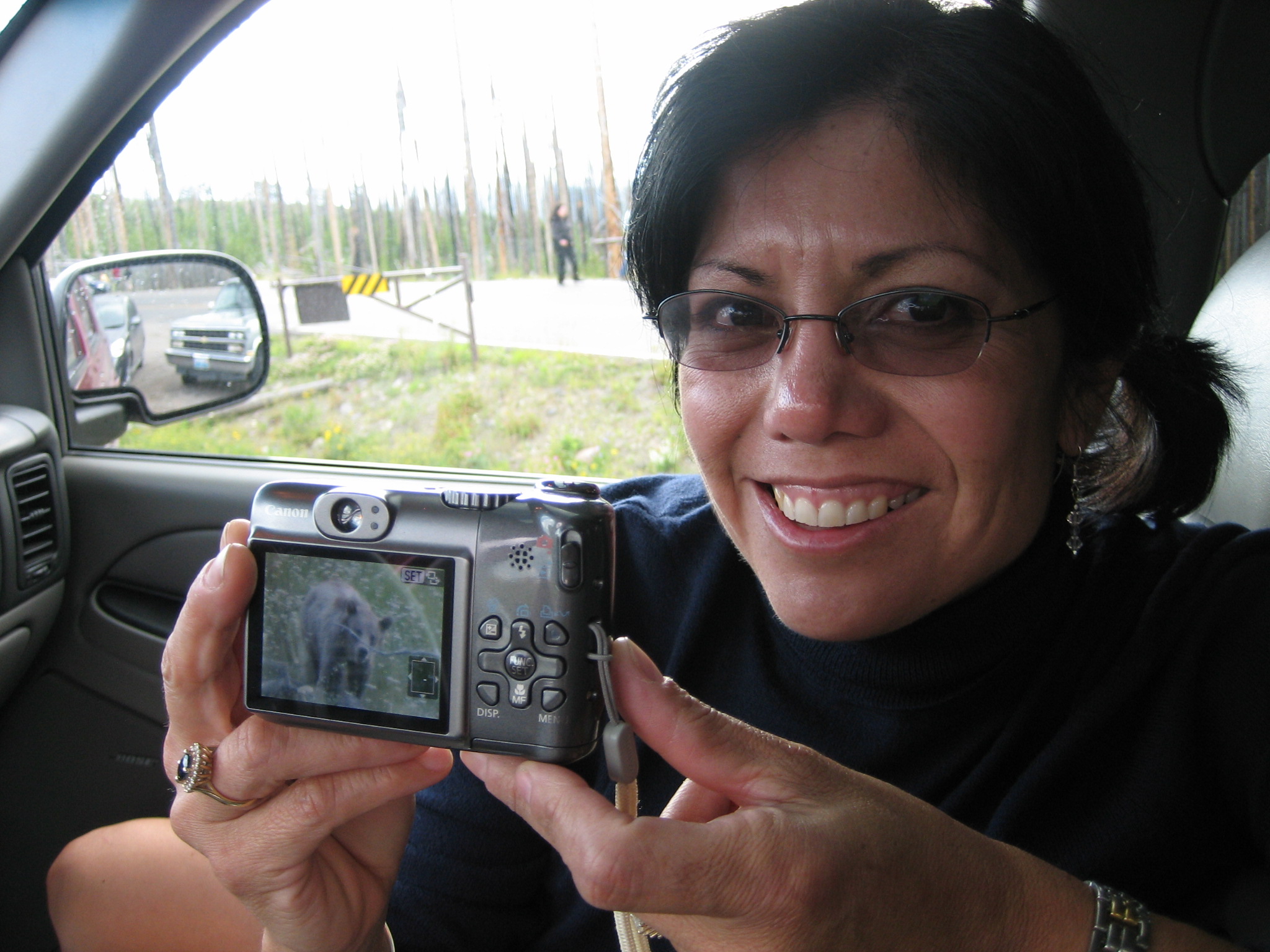 DISCLAIMER: This was not a safe situation, we should have not let anyone out of the car until we knew what the animal was. Bears are wild animals and unpredictable and will attack without warning, don’t try this at home!

Last week I had two friends, Vicki and Kirsten, visit me in Wyoming. We all grew up in Azusa, California together, played flute in the Azusa Aztec Marching band in High School, and we were all in the class of ‘79. The three of us now live in different states and although we have seen each other over the years the three of us have not been together for 25 years. We spent the weekend in Yellowstone National park, the whole time chatting away like teenagers except the conversations were not about cute boys and shopping malls, they were about the men in our lives and the woes of pushing 50.

On day two of our trip we were getting a little disappointed we had not seen the usual amount of wildlife. Vicki and I have been to Yellowstone together several times but Kirsten had not been there since she was a very young child, and for this visit she had her son with her. I was beginning to think all the big animals were hiding from them. That afternoon, between Tower Falls and Canyon Village we topped a ridge and there was a critter jam, traffic was stopped, we could not see the critter due to the angle of the hill. There was a crowd running with their cameras down the road in a frenzy. I let Vicki out to go see if it was something worth stopping for. I figured it was a bison or an elk, maybe even a moose, I told her if the traffic started going again I would pick her back up on the way through. She was gone several minutes, more than enough time to see what it was and come back. I saw a parking spot in the pull out on the other side of the road, only a few yards away so I took it. Kirsten and I got out and told the kids to stay in the car until we evaluate the situation. I had just closed the car door and was adjusting my camera when I was Vicki running to the car, full speed, making the cut sign with her hands across her neck, then she put both hands around her mouth and shouted as loud as possible “GET BACK IN!!!! IT’S A [BLEEPING] GRIZZLY!!”

Vicki had seen the bear and wanted to get a quick photo before she came back to the car. She said it was close to the side of the road, she aimed, zoomed in, and took her shot, just as the bear started walking towards her. She thought ‘what am I doing’ and turned to run. The crowd would not move out of her way, here comes a grizzly bear, only a few yards away and NO ONE was running except her! She pushed the people out of the way, regardless of age, and ran to where I let her out of the car. She said it was just like a movie, she was running for her life and the car was gone!!

All is well, she found where I had parked and we were all safely in the car. We looked out the window and watched the crowd running along side the road, chasing the bear for photos. We waited until they passed then Kirsten and I got out, lagging way behind the crowd, and saw the bear from a safe distance, with plenty of food, I mean people between us. Kirsten got her photo and we left before we witnessed something we would rather not see.

It reminded me of a song…

The other day we met a bear
out in Yellowstone a-way out there.

Vicki aimed the camera at that bear
She zoomed right in a-way out there.

But Julie moved
That great big burb
Holly crap!
Where is that burb!

But Julie moved that great big burb
Holly crap where is that burb!

And so she ran
Across the road
Telling us
It’s time to load!

And so she ran across the road
Telling us it’s time to load!

#CommissionsEarned As an Amazon Associate I I earn from Qualifying purchases.