HomeWyoming Life Live to Ski Skiing with my sons

Skiing with my sons 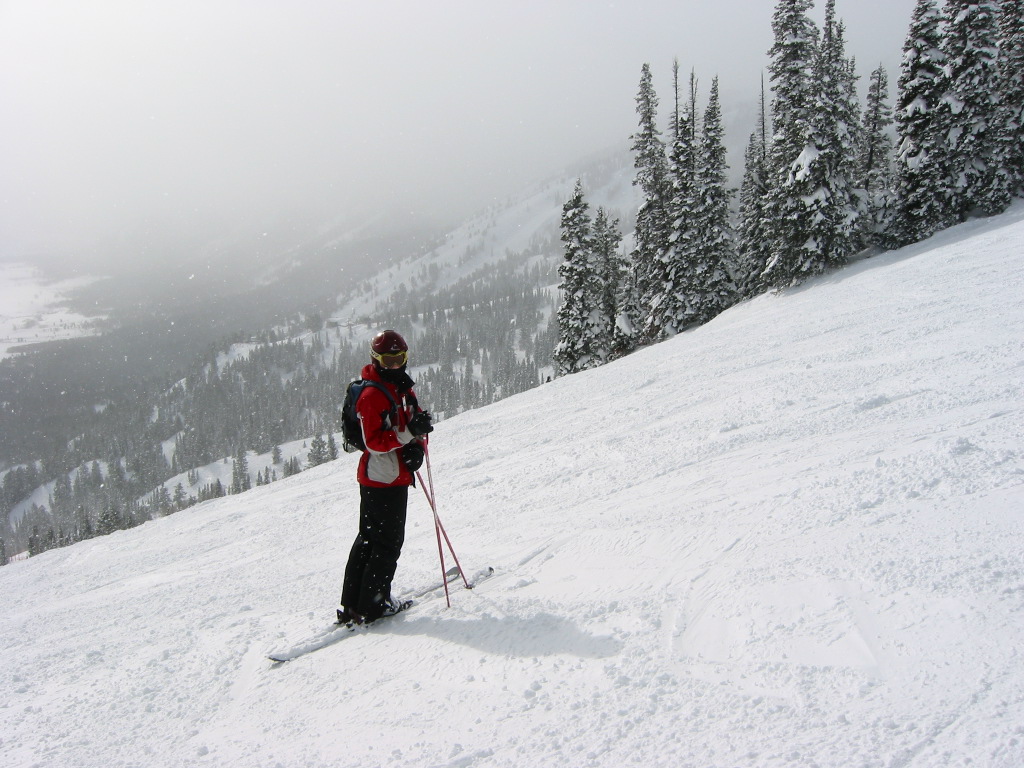 I learned to ski at Mammoth Mountain in California my Senior year of high school and moved to Jackson Hole after high school. I had my first son Doug on trekkies in the back yard at three and skiing on the slope at 5. I was a single mom and we were skiing at full price so we did not go very often. My equipment was from the 70’s and it was torture on my feet. I clearly remember my last day skiing. Doug was about six and we were skiing together on the town hill. After the first run he beat me to the bottom and hopped right back on the chair without me. I tried to catch up for two more runs, each time he was getting a little further ahead of me. I finely had another kid stop him and tell him to wait for me. When I caught up to him at the bottom of the run he was standing there, in the middle of everything, and everybody, crying crocodile tears. He looked up at me and while sobbing said “mommy, why won’t you ski with me?” That was it! No more for me! I decided to devote what little ski budget I had to him. I through all my equipment in a dumpster and swore if I ever decided to ski again I would buy a pair of boots that don’t hurt my feet. I put him in lessons with adults and at age nine he skied with his cousin on the town hill with no adults. When he was a little older I let him ski at Teton Village with his buddies a couple times a year.

On the slope – look above his head, to the left.. that is the warming hut we stop at.

I had my boys 10 years apart and now things are easier to fit into the budget. Jackson Hole Ski Resort has a 5th and 6th grade program… just for being a student in our valley kids get 10 free rentals, lessons, and a 10 punch ski pass. After that they get a free pass to match whatever their parents bought up to age 14. When Kyle started skiing in 5th grade I said to my husband “you know this means one of us need to start skiing again”. He said his knees could not take it and if he breaks a leg he can’t work, so I was elected. I had not skied for over 15 years. So I rented a pair set of ski equipment and hit the bunny hill to see if I remember how. My brain remembered how but my body totally forgot! OMG! After just two hours my legs hurt so bad I could hardly stand. Muscles hurt that I did not know I had, but I went back for more.

I’m not a hard core skier, I don’t have to be on the first tram then ski until they kick me off to have fun. I think of myself more like a sissy-skier. I like to ski nice wide groomed runs and make at least one stop at the warming hut. Getting up at the crack of dawn has been out of the question when trying to get a teenager out of bed anyway. Doesn’t that kid know how lucky he is to live here? Of course not! He’s a teenager, video games sound more fun than skiing with his mom on a cold morning. Just wait until he gets his first deep powder run, he will be the one complaining how hard it is to get his mom out of bed in the morning!

Now each September I sign up for a discounted weekend ski pass through my employer and with the programs the ski hill has my son has skied for free since 5th grade. Next season we pay full price for his pass (ouch!).

See ya on the slopes!