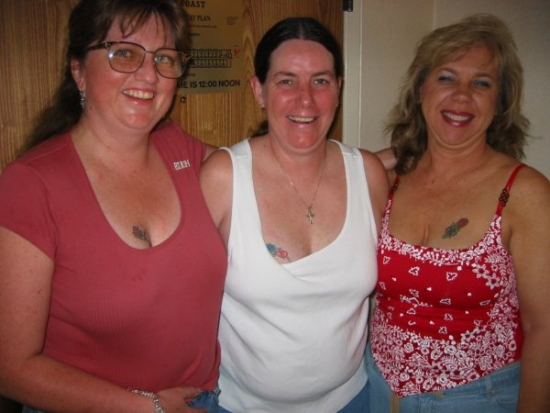 We met up with Judy and John at the Buffet Friday night, plus 2 other Azusa Alumni from Judy and John’s class. We were on good behavior, no food throwing etc., but that might be because Tim and Caryn didn’t meet us until after dinner!

Julie, Caryn, & Roxanne all thought it would be fun to take a photo with all of their tattoos (or tittoos as some call them) and post them without their faces so the other Azusa Alumni members who visit the message board to guess who is who. “the boob contest”. After several peoples guesses Santana Holcomb ’74 guessed correct. If you are wondering what thier husbands think of this….. they took the photos!

When we first were booking our seats for the tremendous spectacle that is the Excalibur Tournament of Kings, we were 11 in number. The booking people told us we would be representing France. We objected strenuously, decided to all buy American flags and wave them in our section as we cheer. Then, as if by a miracle we added 2 more to our party’s number. The show agents cancelled the first seats and gave us a new country to represent..one which most of us carry with us in our genes, Ireland!!
We were ecstatic to represent Ireland. Our group hooted, and hollered, and pounded on the tables with our fists when the glorious Irish king rode his Destrier onto the field of battle, the green and orange flag over his head rippling in the wind. (machine, wind machine, ok??) If our cries alone had been enough he would have won the tournament of champions…alas, it was in the script, our champion did not win through. But when the king of all kings needed our assistance our Irish lord was right there in the thick of battle, ready to lay down his life in defense of his country and the entire kingdom’s freedom! At the end, all the good kings banded together to defeat Mordred, the evil spawn of good king Arthur…Mordred the evil and his warlock magician were vanquished, never to be seen again….
Or were they????
The Azusa Alumni Irish:
Dave, Roxanne, Caryn, Tim, Tim Jr, Robert, Dixie, Julie, Damon, Nancy, Ken, Trisha, Eddie

Yet another Wilson detour

Every road trip when Damon & Julie get behind the wheel an unplanned detour is a must, dubbed a ‘Wilson Detour’. Saturday night was no exception, however Ken was driving. We took a “short cut” to the Excalibur that proved to be longer than taking the freeway. Then when we got to the Casino the parking was tight so we decided to use valet parking to save time only to see the ‘Valet parking full’ sign AFTER getting in line. The girls jumped out and went to the show while the guys worked to get out of line. When they finally managed to work that large Tahoe out of the line the Valet parking opened again, then they were told they would have to go to the end of the line since they did get out of line. So the just went and found a spot not too far to the back of the parking lot. After the show we found the Tahoe and headed for the Gold Coast. After several ‘turn this way only’ signs, dead ends, and closed roads we ended up back where we parked. Damon & Julie were giggling in the back seat, not at Ken’s driving but at the realization that it was not their driving but their presence that causes this phenomenon! ~~~ Dave pointed out that we should have bought a squirrel.

Tim meets his match or twin children of different mothers?

>Dinner at the Gold Coast Cafe’ Sunday night proved to be an entertaining event. Our Philippine waitress kept right up with Tim beat for beat. She had the whole table laughing, she even had Caryn wanting to bring her home. We should have gotten her name so we could find her next year and buy her a drink.

(Gabe Falcon, class of 80, is a drummer in this band) Sunday night those of us that survived the weekend went to The Roxy Lounge at Sam’s Town. Gabe Falcon was playing there that night. We got to meet the band members and visited with Gabe. The guys did not want to dance but that did not stop the girls. Julie’s mom even convinced our waitress to join us in the tattoo’d boob picture. We stayed for 3 sets and had a great time, drinking, dancing and visiting. On Tim’s command we rushed the stage before we left.

We didn’t see any migrating couches this year but Julie and her mom did see a dead bed on the side of the freeway on the way to Sam’s Town. Vegas seems to have a wild furniture problem, maybe they are a protected species.

Here-here to all Azusa Alumni who couldn’t be here and we hope you can make it next year.