The Hruby’s Trek to the USA 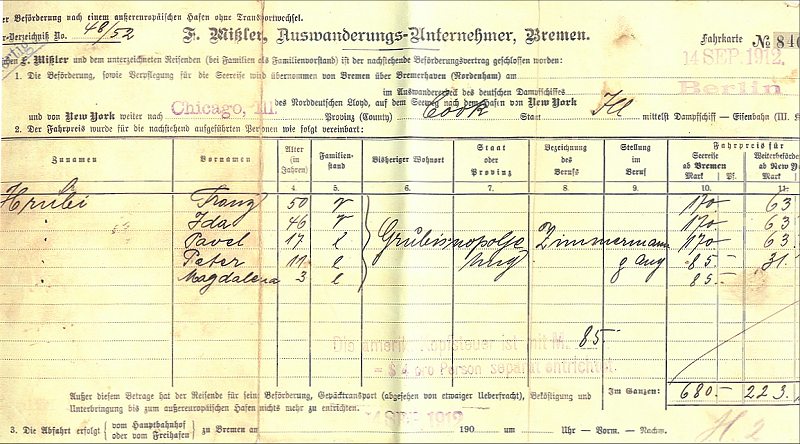 When I started working on my family tree one of the favorite documents I was given was in a file my mom had. Apparently (I don’t exactly remember) my brother or myself had a family tree assignment and both sides of the family wrote some information down for the tree. The story of how my Great Grandpa and Grandma Hruby came to America is a very cool one of hardship and sacrifice.

This is a letter written by Anna Tauber, my grandma’s sister, to my dad on Wednesday March 2nd, 1977. I transcribed the letter as written. Even before computers and internet, politics and religion were hot topics of written communication.

Postmark: March 3, 1977
Hi Dear Kids
I get your letter today on Wednesday and you ask me from where you come. First Grampa Hruby, he was born in Bohimia or Chekoslovakia end Grama she was born in Germani end both was about 18 year of age when they came in Croatia now is that Yugoslavia so they are married over there end they have 11 children. I was 5 years of age when we all go in Brazil with 5 kids. I was 5 years Uncle Paul was 2 years so we go over there like slaves. Granpa he was a carpenter they say they need help in Brazil that 5 familie go in Brazil butt when they come over there they was slaves for rich people they lye to them what they will doo with them they took everi think with them and they soled everyting they should have for White Starfood money. Granpa was lucki he was carpenter he work for one farmer they called Fezendo and Gram, she work like a maid. Butt when all things they soled then they push them back from where they come in Croatia with all children so they start again new life so they came again in back and they start again good life so Uncle Peter was born and another son Joseph butt he dye then your mother was born so we was again happy family we was all good kids no black shepp we have very good parents they teach us for church we, we was very very good katholic, to bad you arnt. Born like that now I think that is nuff what you want know. I give such stori for all kids up here, everibody ask me now even to grand children, if your mom came up here then I will talk more about our familys up here we are all same very busy and everithing cost so much 4.50 is 3lb coffe everithing cost no more what I have gas to pay 200 for 2 months what we will doo I don’t know America she never will be again lajk she was look then that Nixon Devil what he doo with people and Ford finished. Poor Carter he sure have bad time like Roosevelt o boy he sure have rough time. All kids are OK and that winter snow O boy that was some thing tis time was 5 born too us and one more will come in June for now we have 21 Great Children. I loved all of them. Eve she got dog and and she is allitime busy. I don’t fill so good well I wait to end aniway so Dear Kids if you wont know something more then <she’s> ask that educated aunty write me soon. You have cute children o boy everithing catch me so long. Doo you work Dick & doo you have some Flower.

So long and God Bless you, Your Aunty Anna. Come and see us Sometime.

My Aunt Alice gave me this original boat ticket that they immigrated to America on for safe keeping. They traveled steerage on a ship just 5 months after the Titanic sank, arriving at Ellis Island on September 23, 1912.

She also gave me Grandma Krejci’s, (Madge Hruby), original Certificate of Naturalization, it is in cursive with the variable fields typed in. It is illegal to photocopy or scan the document. It reads in part:

Be it know, that at a term of the  District Court of The United States held pursuant to law at Chicago on August 11, 1943 the Court having found that then residing at 2442 South 57th Court, Cicero, Illinois intend to reside permanently in the United States when so required by Naturalization Laws of the United States, and was entitled to be admitted to citizenship, thereupon ordered that such person be and s/he was admitted as a citizen of the Untied States.

In testimony whereof the seal of the court is hereunto affixed this 11th day of August in the year of our lord nineteen hundred and forty-three, and of our independence the one hundred and sixty-eight.

I have been asked why my great grandparents came to America. My answer… to give me a better life. My mom’s side of the family goes back to the revolutionary war, but that’s another story.